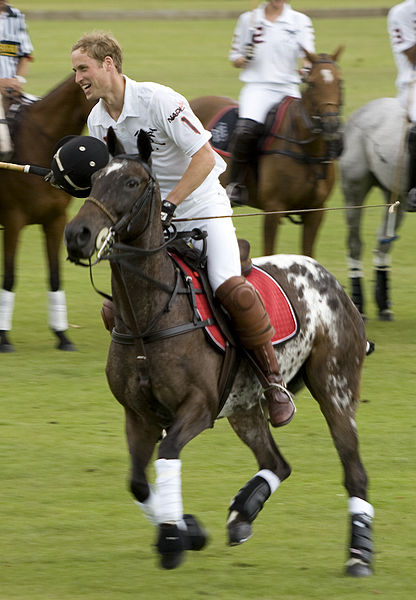 A horse like no other
Unlike any other breed of horse, the Appaloosa’s colour, temperament, versatility and phenomenal athletic prowess have destined it to be different. Those who ride an Appaloosa will tell you there is little it can’t do, and not much it won’t. 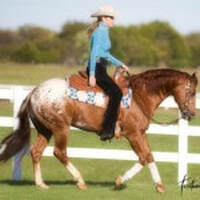 Unbeatable versatility
An Appaloosa is a safe child’s mount one day, and a focused competitor the next. You’ll see these talented horses excel in every field, from Trekking to Grand Prix Dressage, Western Riding to Three-Day Eventing. It’s not unusual to see the same horse complete a cross-country course, then the slowest of western pleasure classes and then demonstrate complete control of a cow in a working cowhorse event, all in the space of one weekend.
the Appaloosa is capable of excellence in any and all equestrian disciplines. Appaloosa riders will credit this to the breed’s natural willingness to please and terrific attitude. Appaloosas are physically tough, strong and agile but most importantly, they enjoy being around and pleasing people. 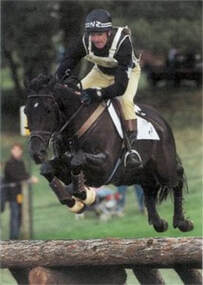 Outstanding quality
There can be no doubting the quality of the New Zealand Appaloosa, whose representatives have to date helped New Zealand riders rise to world class and Olympic standard in dressage and eventing.

Broadcast News, ridden by Mark Todd. Sire; Time’ll TellSometimes thought of as ‘only’ a western horse, the Appaloosa has proved time and again that nothing could be further from the truth! The infinitely talented Broadcast News, a Te Awamutu bred solid coloured Appaloosa by the stallion Time’ll Tell, took the F.E.I.’s Eventing Horse of the World title in 1998, proving his dominance beyond question.  In 2003 I’m Sunday’s Silhouette (left) was pre-selected for the NZ Athens Olympics team in dressage. 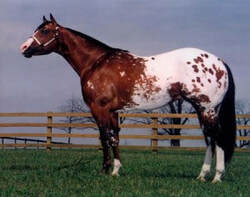 You never know what you’re going to get
Appaloosas come in all shapes, sizes and colours. What’s more, Appaloosas may change as they get older, developing more white, and producing coat patterns you wouldn’t have dreamed of.
Some Appaloosas have no white at all, while some are almost completely white. Others have a sprinkling of white throughout their coats, and some have white blankets over their rumps, with – or without – spots. One thing’s for sure, you won’t find it hard to tell any two apart!

I’m Sundays Silhouette, ridden by Jacqui Winspear. Sire; Sunday’s Sensation.Make no mistake though; the Appaloosa is a breed, not a colour or a coat pattern. Its characteristics go far beyond its colourful appearance, although Appaloosa colour makes an Appaloosa most easily recognisable. It is perfectly possible to breed together 2 highly coloured Appaloosas and have the resulting foal born without a speck of white and for that plain coloured foal in turn to later produce a coloured foal of its own. The pursuit of both quality and colour is what keeps Appaloosa breeders the world over interested – foaling time is just like Christmas! 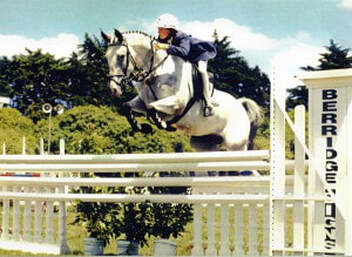 The differences don’t stop there
You’ll notice many Appaloosas have white surrounding their eyes, giving them a very human appearance. This doesn’t mean they’re wild; it’s a natural and unique characteristic that is not seen in any other breed. You can usually also see vertical stripes on Appaloosas’ hooves, and mottled skin on exposed areas. You may also see some Appaloosas with very sparse tails. Most common in black or bay base colours, this characteristic was prized in the breed’s early history as it allowed the animals to be ridden through dense undergrowth without snagging their tails.

Sunspot Flash Chick. Sire; Plaudit Flash FoxHow tall is an Appaloosa? Well, it depends. The modern Appaloosa ranges from 14hh upwards, and 16.2hh is not unusual. There’s no upper height limit, but Appaloosas are horses, so are not less than 14hh. If an Appaloosa happens to fall below the minimum 14hh mark, it is considered a pony and does not qualify for registration as an Appaloosa horse.
Because the Appaloosa is a dominant breed, it has often been crossed with other breeds to produce taller, or more muscular, or finer animals that retain the wonderful temperament and colour the breed is known for. In New Zealand, crossing with Thoroughbreds to produce outstanding (and calm!) dressage and jumping types is common, as is crossing with the Quarter Horse to produce type more suited to western riding. 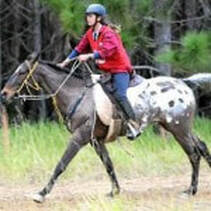 Keeping the colour
Some breeds and colour patterns disrupt Appaloosa colour and are disallowed by the New Zealand breed registry for that reason. For example, the grey gene is dominant over others, so when an Appaloosa is crossed with a grey and the resulting foal carries the grey gene, any Appaloosa colour will fade as the horse ages.
The coat patterns of Pintos and Paints indicate colour-producing genes of a completely different type and can co-exist with Appaloosa colour. This cross is also disallowed. 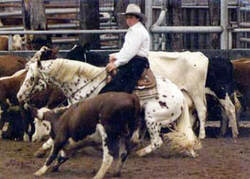 What is a registered Appaloosa?
A registered Appaloosa has a traceable pedigree, is on record with the breed association and has an endorsed registration certificate to prove it. The association can tell you its name, parentage, date of birth, colour, brands and identifying characteristics so that you as a buyer (or seller) can be confident that the Appaloosa in question is what it is represented to be. You also know that the horse has met the minimum standards for Appaloosa registration in New Zealand.
The Appaloosa Horse Association of New Zealand is the official breed registry. Through us you’ll find plenty of information about the breed, registration, annual and lifetime awards for competitive horses and riders and much more. 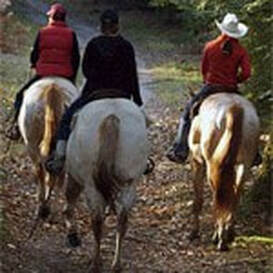 Where did the breed come from?
The Appaloosa’s heritage is as colorful and unique as its coat pattern. Humans have recognized and appreciated the spotted horse throughout history. Ancient cave drawings as far back as 20,000 years ago in what is now France depict spotted horses, as do detailed images in Asian and 17th century Chinese art.
The Spanish introduced horses to North America as they explored the American continents. Eventually, as these horses found their way into the lives of Indians and were traded to other tribes, their use spread until most native American populations in the Northwest were mounted (c 1710).
The Nez Perce of Washington, Oregon and Idaho became especially sophisticated horsemen, and their mounts – which included many spotted individuals – were prized and envied by other tribes. Historians believe they were the first tribe to breed selectively for specific traits – intelligence and speed – keeping the best animals and trading away those less desirable.
When white settlers came to the Northwest Palouse region, they called the spotted horses “Palouse horses” or “a Palouse horse”. Over time, the name was shortened and slurred to “Appalousey” and finally “Appaloosa”. During the Nez Perce War of the late 1800s, Appaloosa horses helped the Nez Perce avoid battles and elude the US Cavalry for several months. The tribe fled over 1,300 miles of rugged, punishing terrain under the guidance of the famed Chief Joseph.
When they were defeated in Montana, their surviving horses were surrendered to soldiers, left behind or dispersed to settlers. This had a devastating effect on the breed, which was dying out until 1938, when the Appaloosa Horse Club was formed in the USA for the preservation and improvement of the diminishing spotted horse. Since that time, the breed has not only recovered, but has become one of the world’s most popular and widely used.
Powered by